Editing was not something I went into my film school excited to learn about. I thought of it as that thing you had to do in order to complete your movie and not much else.

Imagine my surprise when my instructor informed us all that the edit was your last rewrite for your film. I had never thought of it like that before. I leaned forward, eyebrow raised and hand firmly under chin, and I whispered, “Go on.”

I became an interpreter of the footage in front of me, the author of the final story.

Since editing can seem overwhelming, I thought I would give you some tips in order to start your journey. Once you get into it, it can actually be quite good fun.

Editing is truly the final rewrite of your film, have fun with it and make is a good one.

No matter where you’re at in your skill set, watching tutorials is always helpful. If you’ve never edited anything together and don’t even know where to start, free tutorials on YouTube have been designed just for you. Of course there are plenty of tutorials that cost you dollars, which are great as well and give you a more in-depth look. If you’ve been around the block a few times, you’re probably already pro level at finding a YouTube tutorials for your specific situation.

No matter what you’re editing whether it’s a short film, interview, or wedding video, watch every bit of footage recorded. Even watch the clips that think are only mess ups. There are moments in clips that can work for your movie or video that you didn’t think would unless you had watched everything. Watch all of your clips before importing as well, so you can label them appropriately (if they’re digital clips).

5
Find Your Own Rhythm

Any time I’m editing something together, I want to have a certain feeling or pacing depending on the emotion of the scene, situation, or piece. I try and find a song that I feel matches the tone of the scene or video, and I edit to the song. When I was editing a short film about a young man dealing with the grief of losing his father, I listened to violin music in order to get in the head space of long, slow shots and editing. However, I listened to more frenetic/experimental types of music when editing a scene from another film where a character is having a stroke. Listening to music helps me decide the tone and pace of a piece. The only danger is that you can grow too attached to the music you have playing underneath the scene.

Once, I was editing my final project on my film school, and as I watched my edit back I knew there was something wrong. I called one of my instructors over to have him watch it, and he told me to edit out a lot of my middle section, because it wasn’t working and slowing my story down.

I protested, but he simply placed his hand on my shoulder and told me to kill my darlings.

I did. I got rid of parts of my story that I loved dearly. The end result was much stronger because of it. Sometimes in an edit (especially if we wrote or filmed the piece ourselves) it’s easy to get attached to an idea that isn’t working. Be ok with killing your darlings, because our work is often more rich and clear as a result.

I was editing a short film, and the beginning wasn’t working for me. It was taking too long to get into the action of the story as it was scripted. I made a bold choice. I started the edit of the film 1/3rd of the way into the script, reinserting Act 1 later in the story as a sort of reveal.

I wasn’t sure it was going to work, but after watching it back through, the story came alive to me in a way it never had before.

If something isn’t working, don’t be afraid to try something wild or unorthodox. You never know what’s going to work until you try it. In this day and age, undoing is just a command-z away. 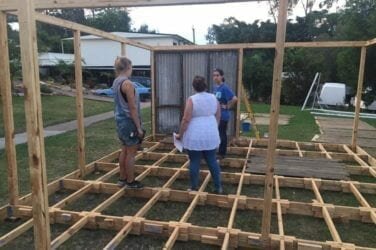 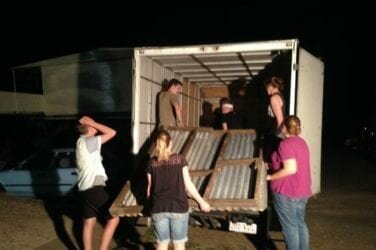 Week one: We’re building a cabin, that’s supposed to look like it’s been in ...